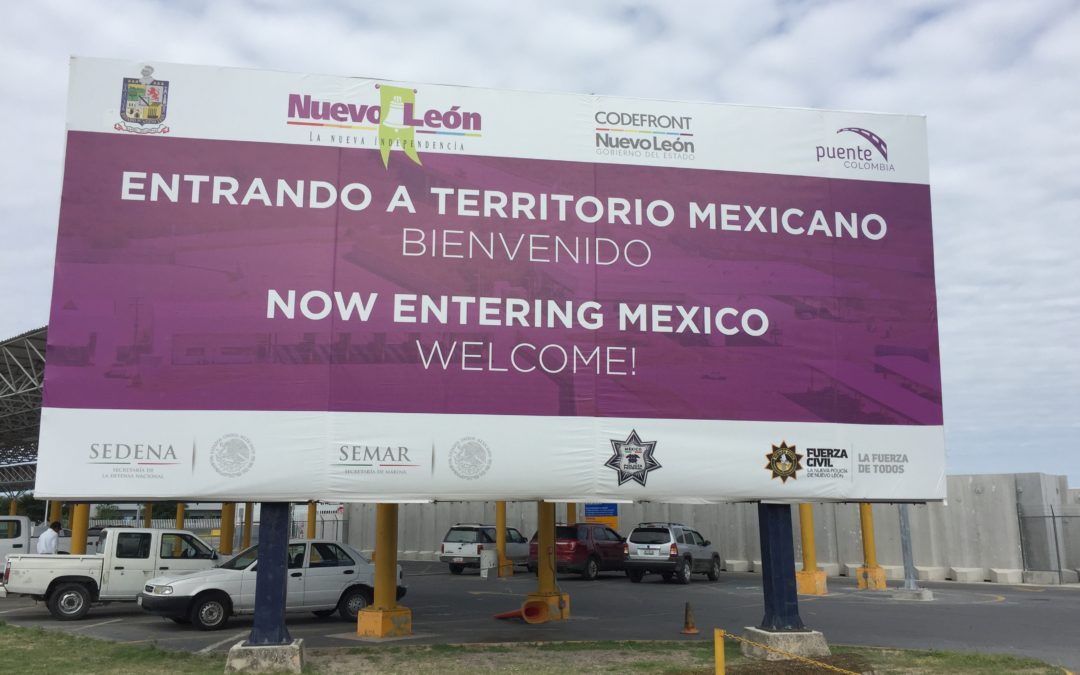 Yesterday morning we left Laredo, and drove to the Colombia bridge, which is technically part of the Laredo bridge system. It was about a half hour drive to get there.

Some will say just cross the border at one of the main Laredo bridges, as opposed to adding an extra hour of so in travel time by going to Colombia. Here’s the info I’ve gathered about the pros and cons: 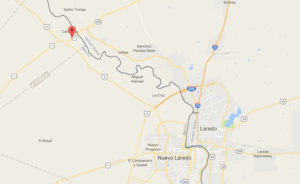 The pros of Colombia is that it tends to be less busy, and everything is under one roof – inspections, customs, visas, and getting a vehicle TIP (Temporary Import Permit)

If you cross at one of the main Laredo bridges, then you have to drive into Laredo a bit to finish the process, and I’ve heard that getting there can be a bit tricky. I’ve also heard it’s busier, and can be a bit hectic. 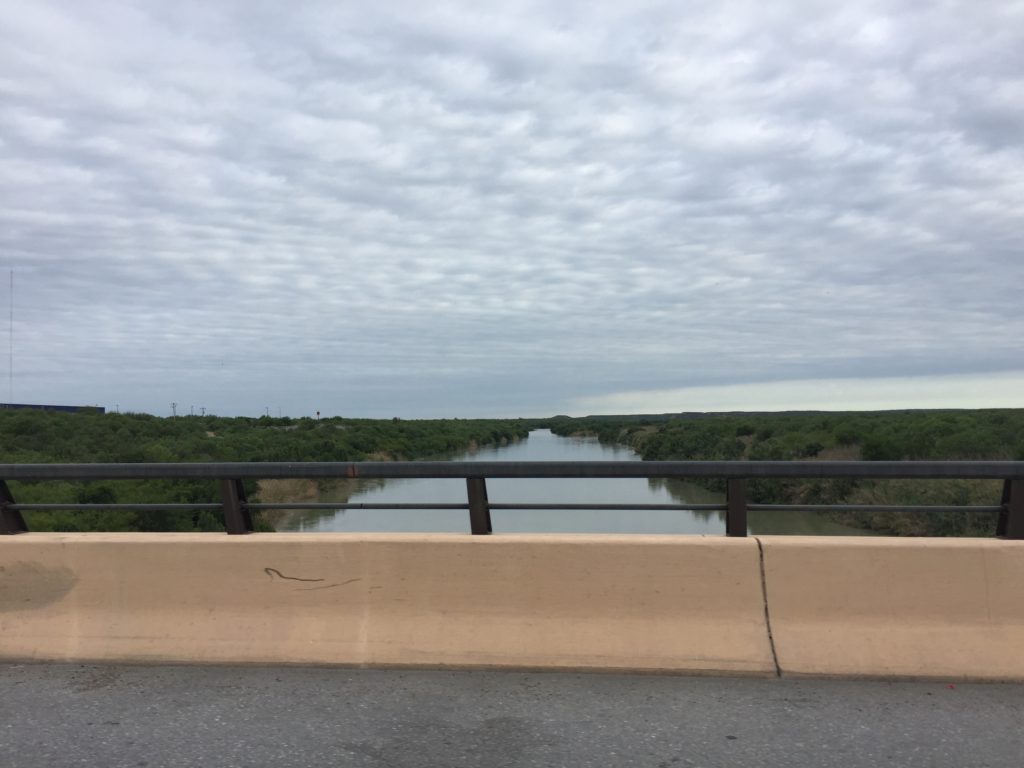 Someone else had also mentioned that they ran into some trouble on the road from Colombia back to Laredo (on the Mexico side), specifically with somebody trying to run them off the road, or take their car, or something along those lines. They said that the road is not patrolled by police. We took our chance, and didn’t have any troubles at all. Maybe cartel members aren’t out causing trouble on Sunday mornings. Maybe they’re all at church!

Since this is my first time driving into Mexico, I can really only speak as to our experience crossing at Colombia. Here’s what it was like for us. 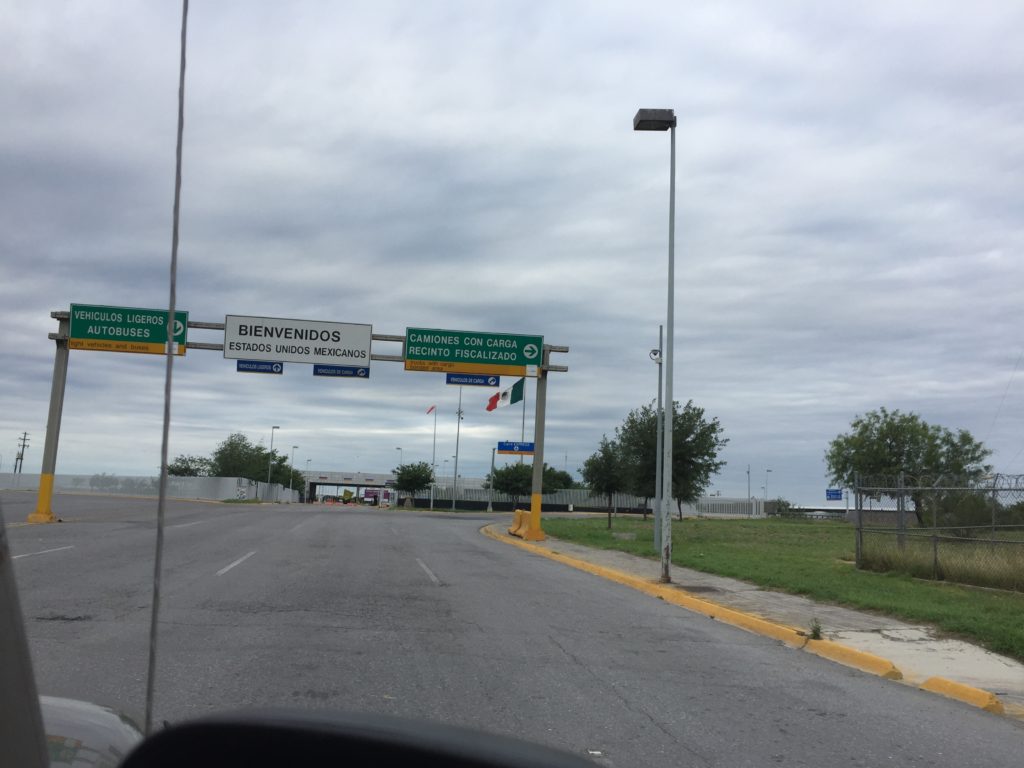 We got a bit of a later start than planned, so we pulled into Colombia about 8:45 on a Sunday morning. They open at 8:00.
We were directed into a small parking lot, where there were 3 other pickup trucks in various stages of inspections, all packed with stuff in the beds of the trucks.

The customs guy had us open our trailer so the custom canine could sniff around. Our trailer was pretty full, so he asked us to empty about half of it. So, we unloaded half of our stuff onto the parking lot. The dog sniffed around, and we were good with the canine screening. 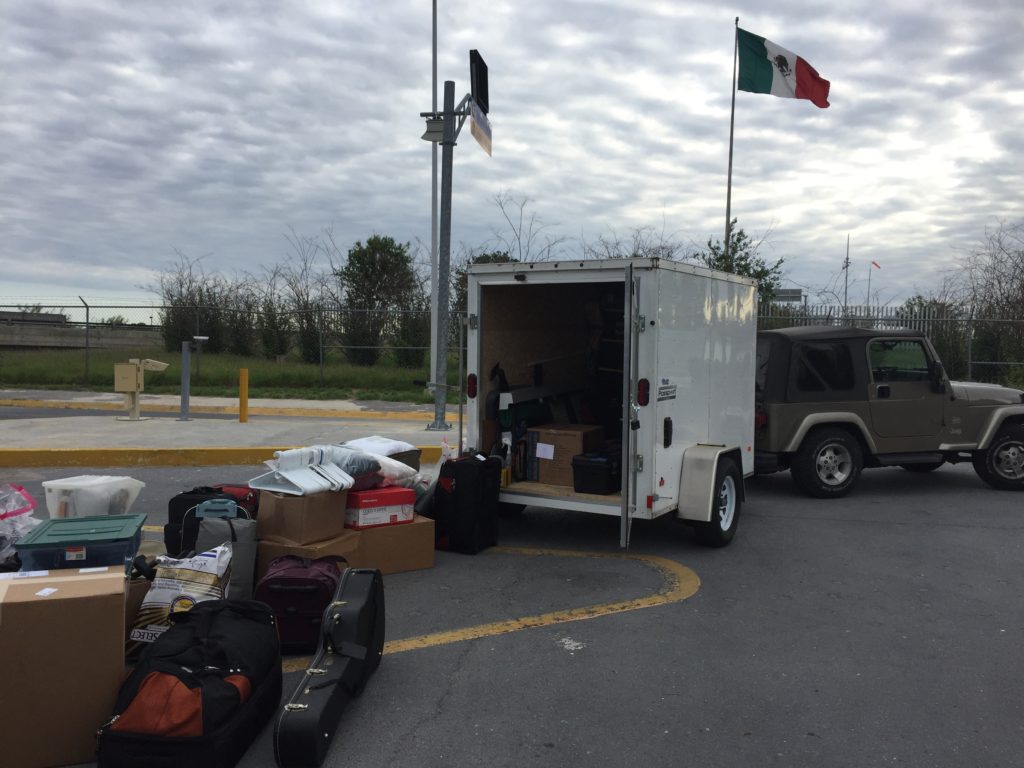 Trailer inspection at the Mexican border, with all our shiz out on display

He also asked if we had any guns. Nope – no sir. We’re that rare breed of Texans that don’t have guns.

Then the customs guy asked what stuff we had in all of the boxes. We started to explain, and then quickly remembered we had a list of everything. I handed him a copy of the list, which had each box number, along with a summary of its contents, in both English and Spanish.

Pro Tip: If you create your list in Google Sheets, you can use the “=GoogleTranslate” function to automagically translate into Spanish.

The inspector asked a few questions, mainly about the tools I had, and also our laptops. We had 4 laptops on our list. Hey – we both work online – we live on our laptops!

He said that we were allowed one laptop per person, so we would need to pay a duty / import tax on the others. Plus on all of our other stuff. I started to get a bit nervous, as we have a trailer full of stuff. How will he determine the value? I would guess we had at least $5K worth of stuff. Probably more. I have no idea.

Well, he simply looked at the list I gave him, and then looked around at all the boxes (he never even opened any of the boxes), and then gave us a valuation of $650 US. And with a tax of 16%, we had to pay $104. What a bargain!

We could then pack everything back up in the trailer, and head inside.

First stop was to get our TIP – the Temporary Import Permit for our Jeep and trailer. This happens at the Banjercito window.
I handed her our passports, and the titles to both the Jeep and the trailer. I also had copies of all of that, which I gave her. She then asked if we had our Visa cards yet. Nope. So she sent us to a small office 20 yards away to get our visas.

At the visa office, we filled out the Visa cards, she stamped our passports, and she sent us back to the TIP lady.

Back at the TIP window, she asked for our visas, which I gave her. She then asked for a copy of the visa. Dang it! Back to the visa office, where the visa lady made a copy, and then back to the TIP window again.
Everything is now in order – pay the TIP fee and deposit (which we get back when we take the car out of the country), and we now have our TIP, including the window sticker which goes on the windshield.

Next up was customs. We had to pay our $104 customs import tax. We tracked down the customs guy, who took our list of stuff, our passports, did a bunch of typing in the computer, handed us a bill, and sent us back to the Banjercito window where we paid for our TIP earlier.
Hello again, we said to the lady. Nice to see you for the 4th time today.
We paid our customs tax, and took the receipt back to the customs guy, who gave us back our passports, some paperwork showing we had paid, and we were done.

Note: For the TIP – we were able to charge it to a credit card. But for the custom tax, we had to pay in cash (which we paid in US dollars).

Back out to the car, we talked to the inspection guys again, and they said we had to run our car through the X-ray machine.
So we drive the Jeep and trailer over to the X-ray area, and drive in between two big ass solid concrete walls.
We get out, stand behind said wall, and our Jeep is x-rayed. Pull out, drive back to the inspection area, and wait for further instructions.

I was very intrigued with what a vehicle X-ray looks like, but we didn’t get to see it. Bummer.

We waited for about 5 minutes, and one of the guys came out, gave us a double thumbs-up, and we were finally good to go! 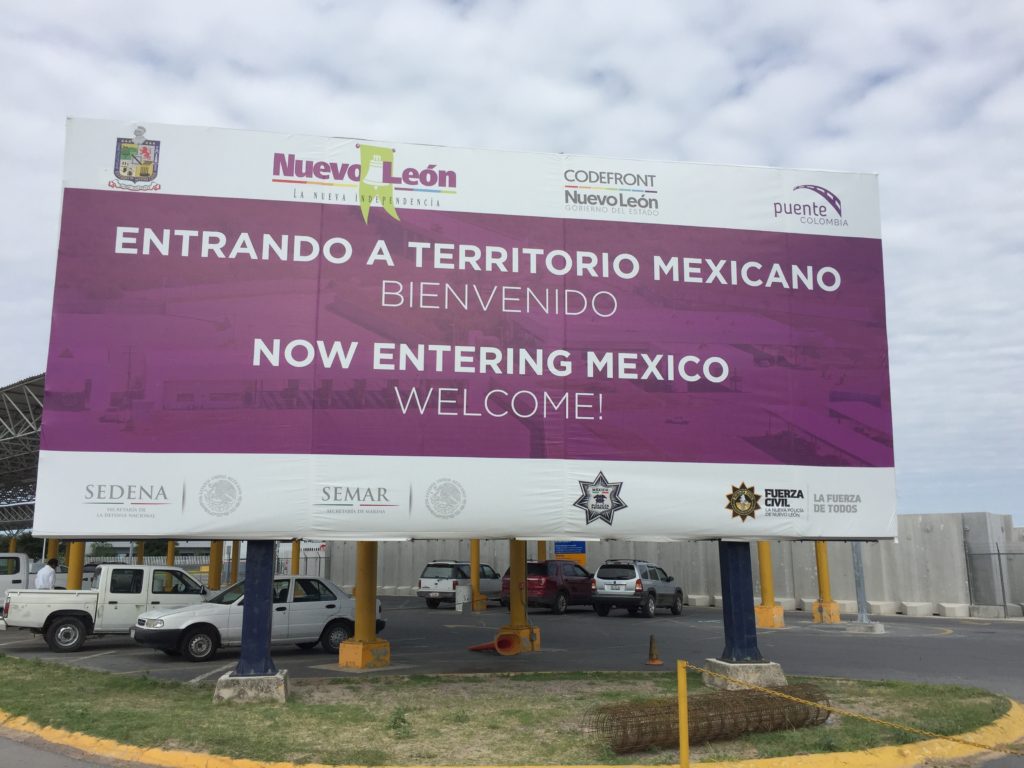 The total time from drive-in to drive-out was about 90 minutes.

It was pretty straight forward and easy. Everyone there was very pleasant. It wasn’t busy, so we never felt we were waiting in lines. Having everything in one place really made the entire process simple.

We also had our two dogs with us. We were fully prepared with medical records, rabies certificates, health certificates, as well as copies of everything. They never even asked about the dogs or any of their paperwork.

Once we left Colombia, we drove back towards Laredo, and then headed South towards Matehuala.