Laredo to Matehuala – Day 2 of our road trip 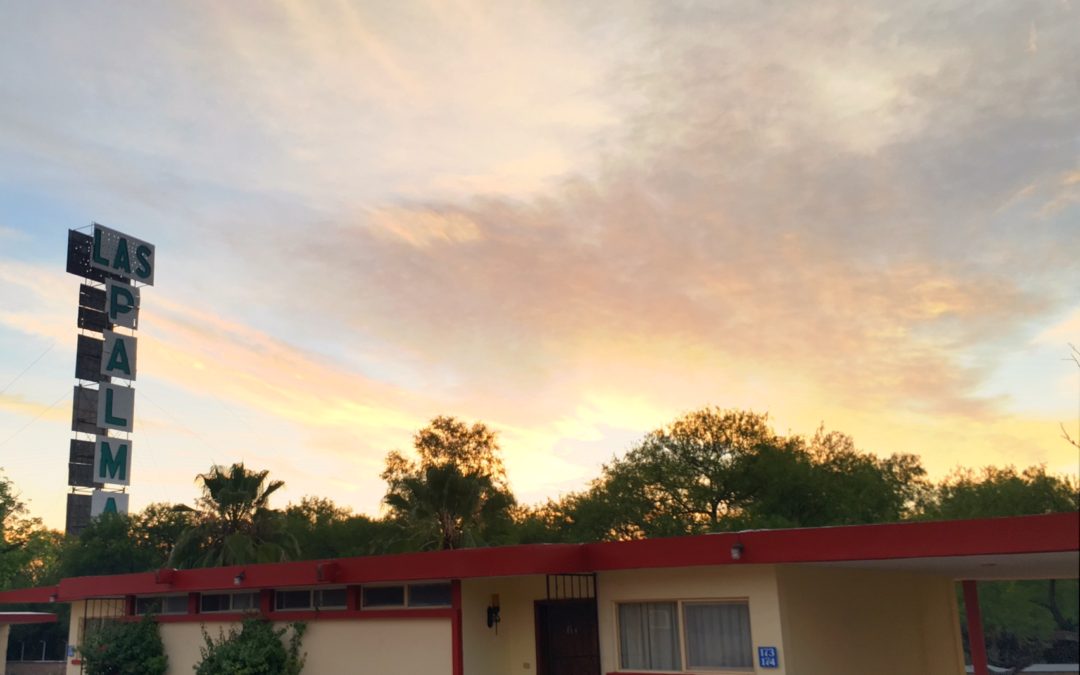 After the fun of inspections, visas, and customs at the border, we were on our way South.

We drove from Laredo TX to Matehuala, San Luis Potosi. About 350 miles. Total driving time was about 8 hours. 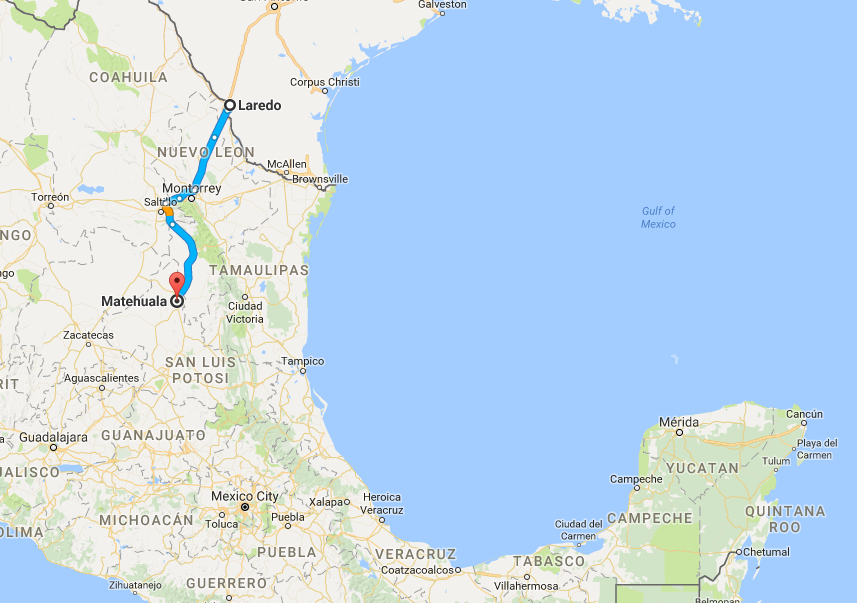 The drive was fairly easy, and the roads, for the most part, were pretty good.

On a number of occasions, we were driving down a highway, and saw herd of animals grazing in the medians – goats, sheep, horses, cows. Kinda crazy, we thought – what if one of them darts out into the road?

Well, mid afternoon, it happened, We were rockin down the highway at 65 miles an hour, when all of a sudden we see a herd of goats crossing the highway. Single file, taking their damn sweet time.

I had to lock up the brakes, the ABS kicked in, and we went skidding towards the goats. We stopped just a couple of feet from the goats, who were continuing on, oblivious to the fact that they almost became cabrito taco meat. I looked in my mirror, and luckily the 18 wheeler behind me scooted left, also coming to a screeching halt.

And that, kids, is why you don’t drive on Mexican highways at night. It’s less about the banditos / cartels / bad Hombres, than it is about animals crossing the road or sleeping on the warmth of the asphalt. If it was at night, you’d likely hit something. And that’s no bueno!

With the adrenaline kicked in, it was no problem making it the rest of the way to Matehuala.

Bessie is awesome in the car. We have her bed in the back, and she pretty much sleeps the entire time, as happy as can be. 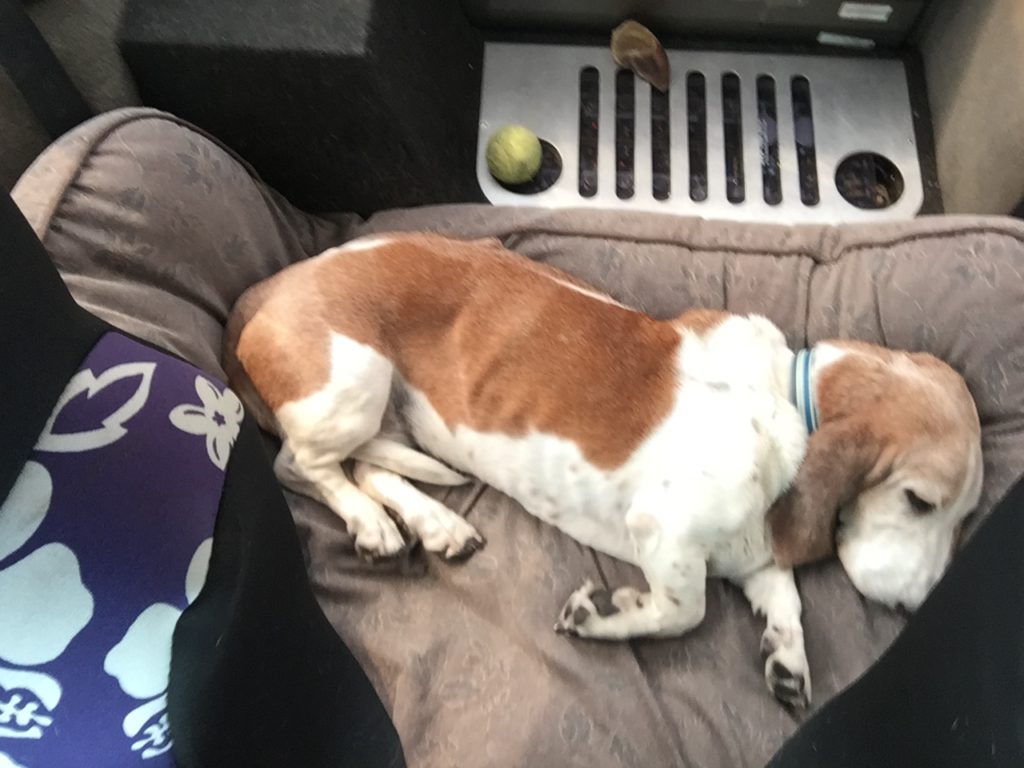 Bessie, snoozing away in the back of the Jeep

Sadie on the other hand, has too much energy, She wants to be up front, where she can see everything. 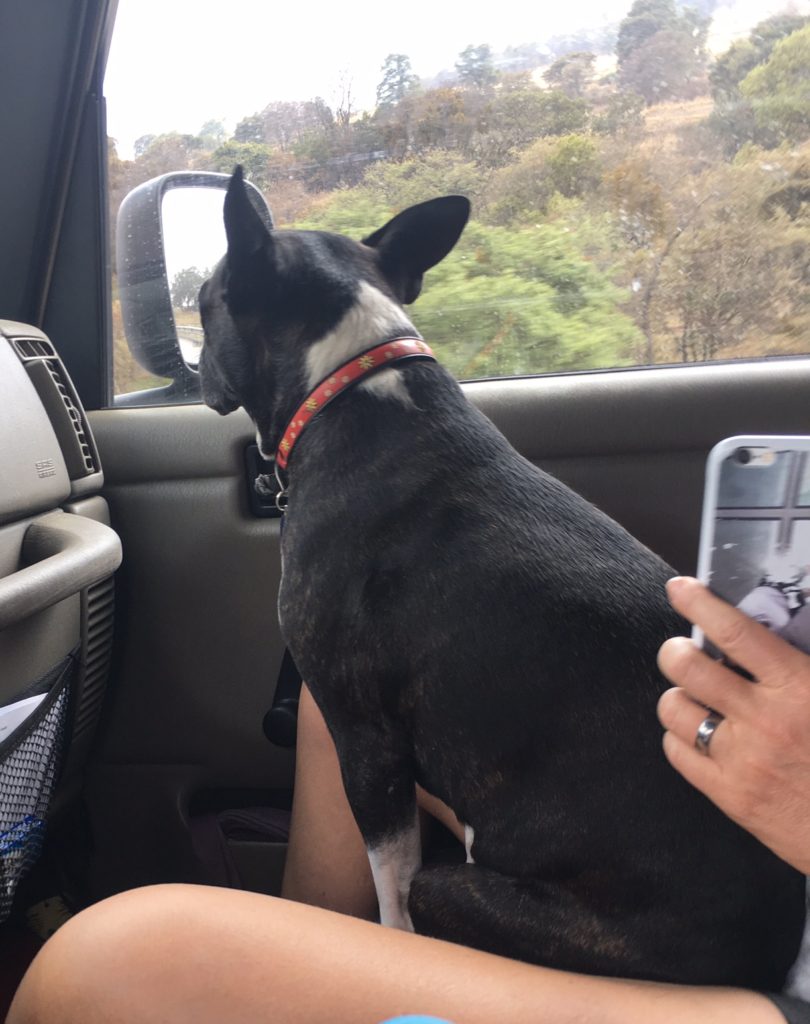 Sadie, loving the view from the front seat, on Elizabeth’s lap

Although, for a while today, they both slept in the back. 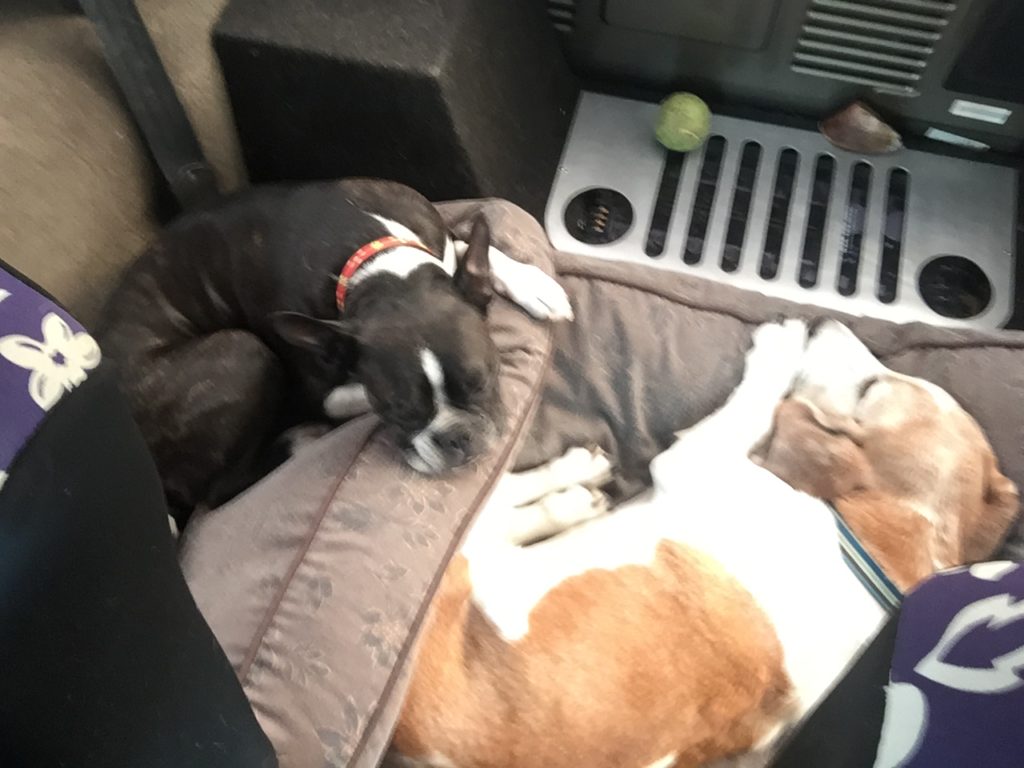 Sadie and Bessie, catching some ZZZ’s

We spent the night at Las Palmas Midway Inn. Many of the travelers through Mexico recommend this place, so we gave it a shot. 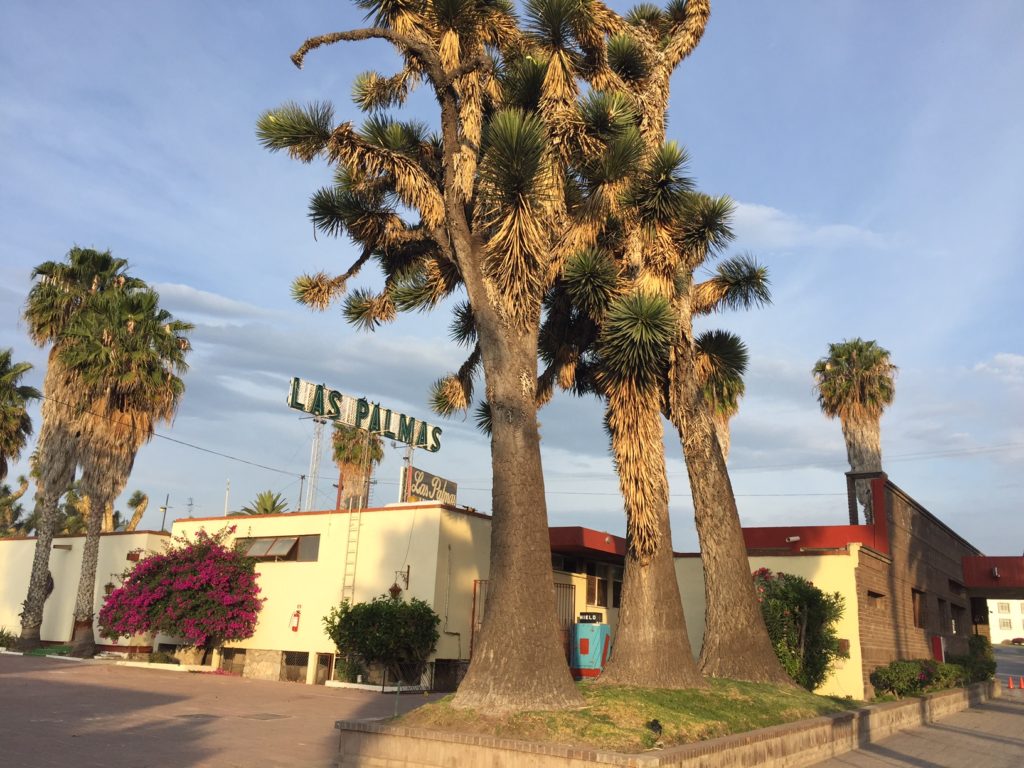 The place is right on the highway, so its super convenient as an overnight stop over. You can drive to and park right at your room, which is very convenient, and very safe. The rooms are basic, but clean. And they accept dogs – which was a requirement for us. 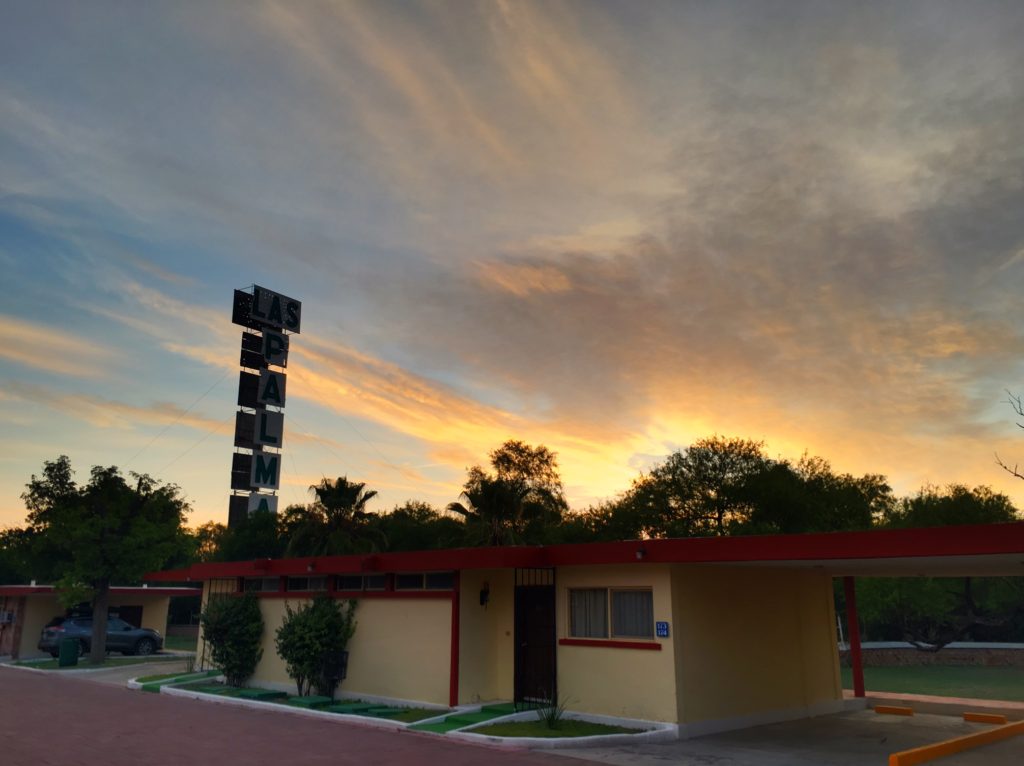 The restaurant has an outdoor patio, so we were able to have dinner there, and bring the dogs with us. The food was fine. Nothing spectacular. Bit it was convenient, and good enough.

And did I mention it was only about $45 US per night!

The next morning we had breakfast inside the restaurant. Again, the food was adequate. But the decor! It was right out of 1950. It reminded me of a HOJOs from when I was a kid. 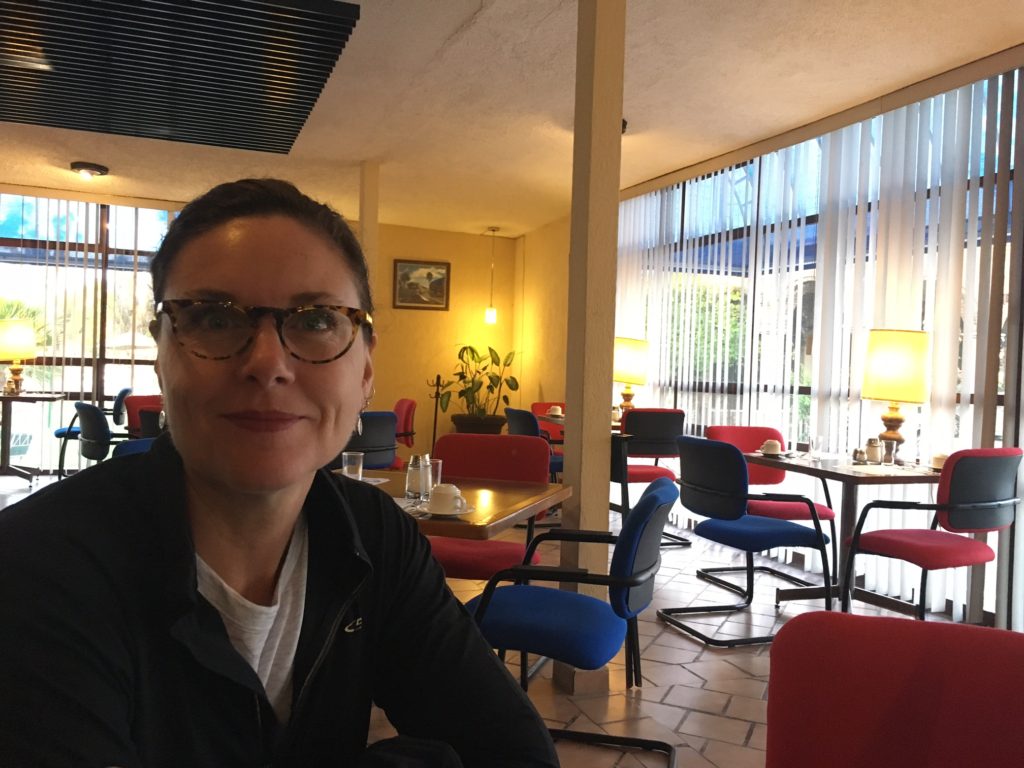 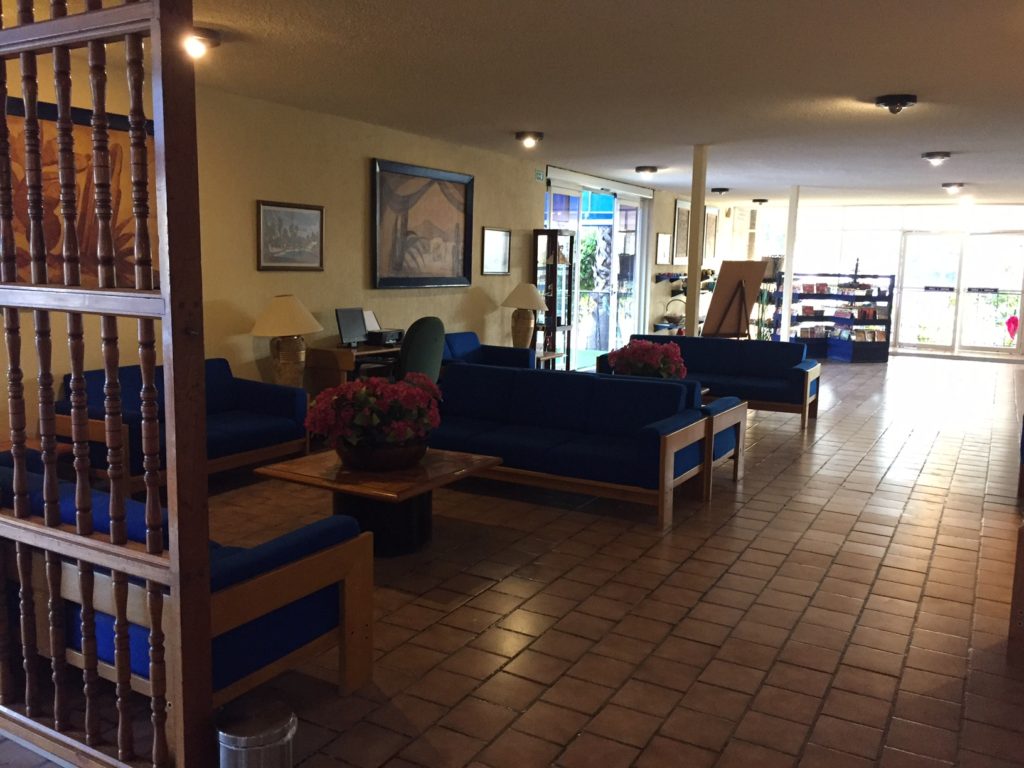 At least they had the retro fonts on their menus and checks to match – so that gained some points with us! 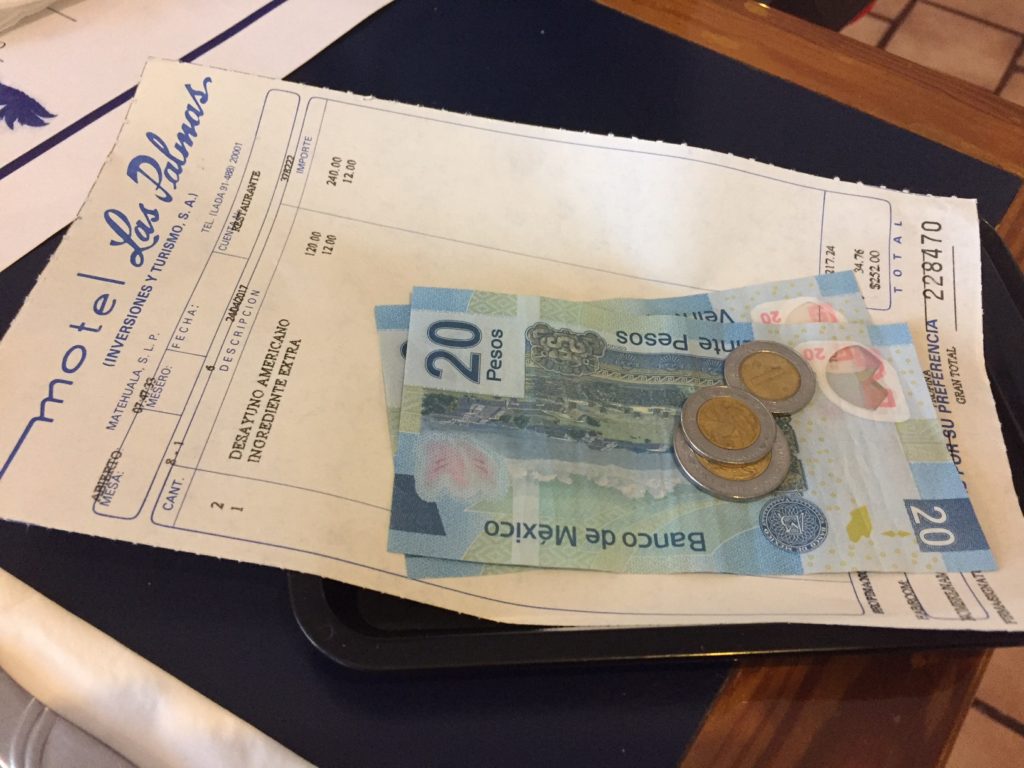 Oh, and did I mention they have a putt-putt mini golf course on site? Golfito! No, we didn’t have time to play. 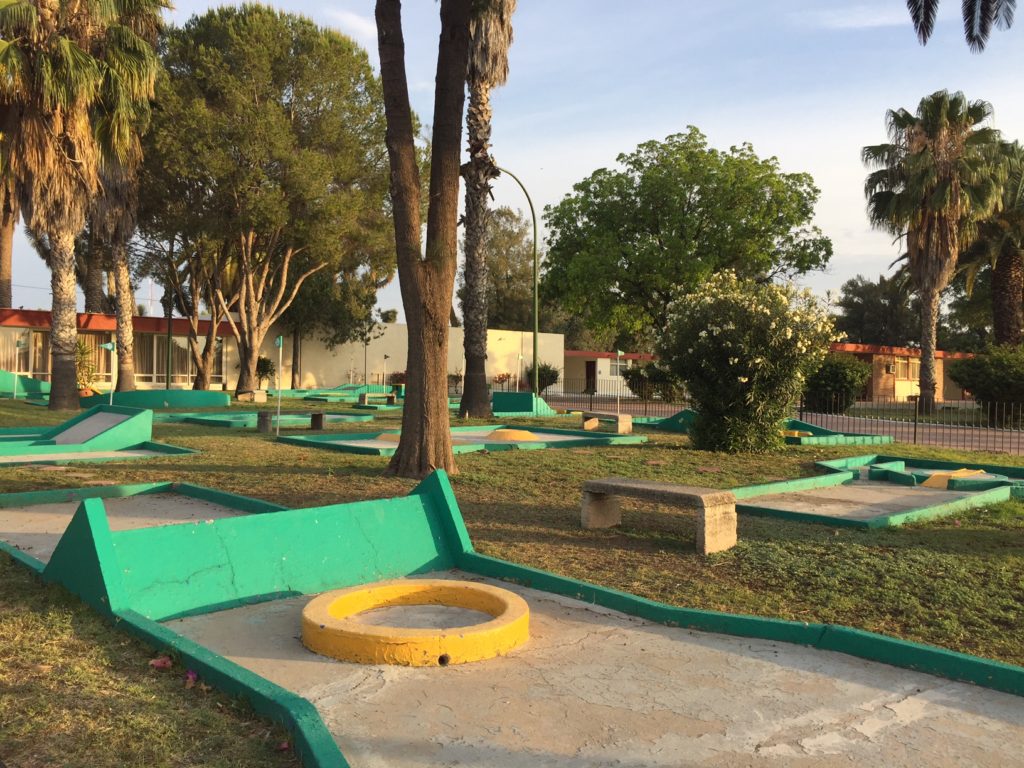 After breakfast, we headed off to Puebla. That’s a post for another day…