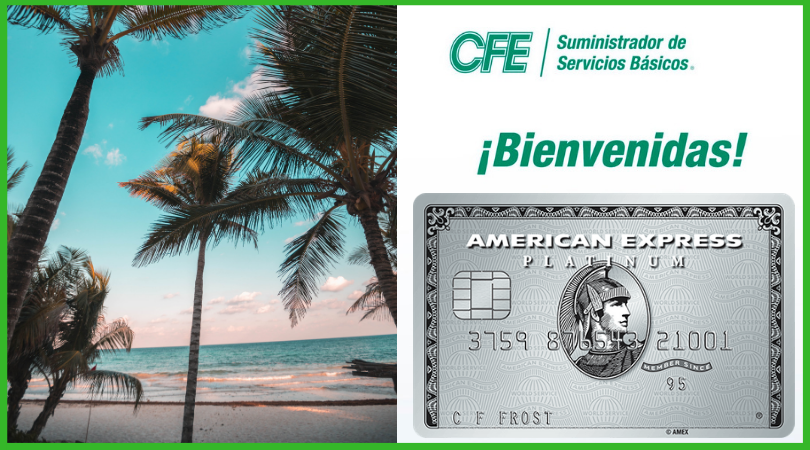 One of our most popular posts is about the difficulties in paying our CFE (electric) bill online, especially using a US-based credit card.

Well – good news – CFE has just made it a bit easier – you can now pay online at the CFE website using an AMEX (American Express) card – even if it’s a US-based card!

When our bill arrived this week – I wanted to try again paying directly on the CFE website using my US-based Visa or Mastercard – just in case something had changed.

I tried both a Visa and a Mastercard, but same results as in the past – it wouldn’t go through.

But – I did notice a new option – pay with American Express! 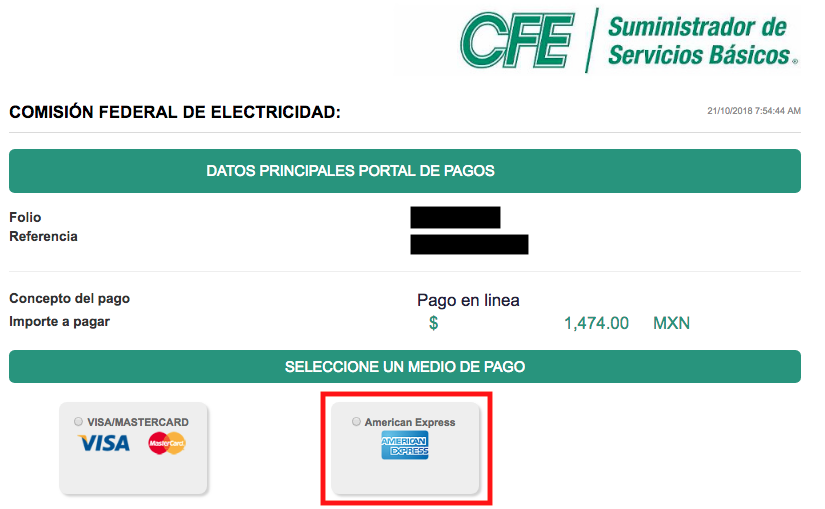 I entered my Amex details, and they also asked for my address information, so I entered the billing address for my Amex card.

It all seemed to work just fine. My CFE account was showing paid. But the charge didn’t immediately show up in my Amex account.

I did get an email from American Express though, saying that a recent transaction was secure:

SafeKey is an enhanced layer of security that uses the latest technology to help protect you against fraud while shopping online with your Card.

Whenever you shop online at a participating retailer, SafeKey will appear towards the end of your checkout process letting you know that American Express is working to keep you secure.

The next day I checked my Amex account, and sure enough – the transaction had posted! 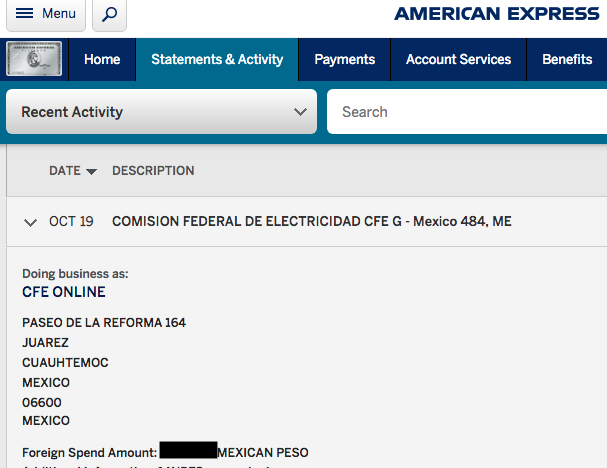 Not only was I able to pay my CFE bill online, I was able to do it without any additional fee (such as the fee when paying via pagamobil) – AND I was able to earn Membership Rewards points!

The CFE mobile app wasn’t loading for me for some reason, so I wasn’t able to check if it was possible to pay using Amex on the CFE mobile app. I’ll try to remember to test this next billing cycle. In the meantime, if someone tries this – please leave a comment below and let us know.

For those that know me well, you probably know I’m a bit of a junkie when it comes to airline and reward points.

For example, we recently spent a couple of days at a resort in Cancun, and paid for it with points. We also just got back from a trip to Greece – where we flew first class for free – using Membership Rewards points! So earning points are important and valuable to us!

In addition to earning points – the Amex Platinum card also gets us into airline lounges – which makes long layovers a lot more enjoyable. We get access to the Amex Centurion lounges (which are amazing!), Delta SkyClubs, as well as over a thousand Priority Pass lounges around the world.

Amex is currently offering 60,000 Membership Reward points after spending $5000 in the first three months – enough to get your own free flights or hotel stays.

It’s kinda crazy that doing something simple – like paying a utility bill online – isn’t as easy as it should be – even today.

But, this is Mexico. So I’m not that surprised.

Every two months, when we get our electric bill, it feels like a game, seeing how I can pay my bill, without leaving my house, paying the least amount of fees, and earning some reward points as well.

I think I finally have a winning strategy. Hopefully CFE doesn’t change things for the worse.