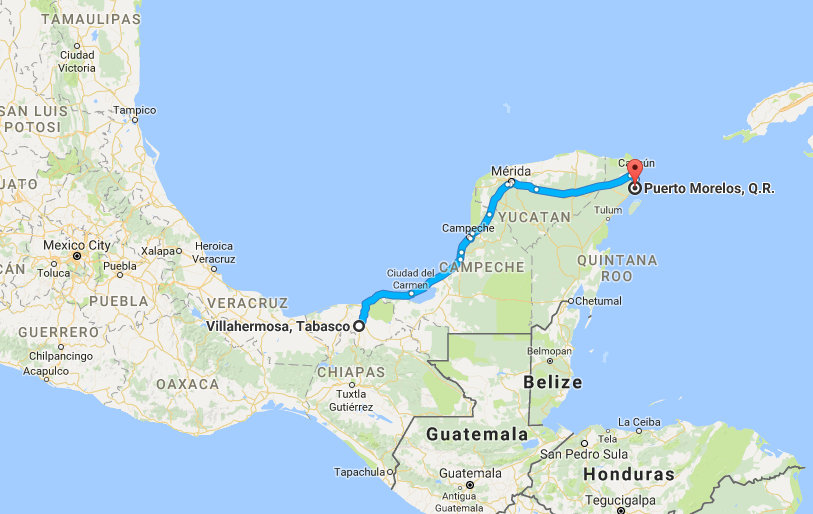 We hot our first speed trap today, around Champoton. Coming across one of the bridges, the elevation drop of the road naturally lends itself to going fast. I was even going a bit faster than I expected. Coming around a corner, and there’s a cop with a radar gun. First speed trap of the trip. But we were under the limit. If I hadn’t had the trailer on, I would have likely gotten tagged for speeding.

After Frontera, but before Ciudad del Carmen, we ran through the town of Atasta. It’s the land of 1000 topes. Holy crap! There was seriously like 50 topes in this little town. One lane in each direction, coupled with lots of topes, meant getting through this town took FOREVER!

For those of you not versed in topes, here’s the deal. You might have heard of them referred to as speed bumps. That’s true, but seriously undervalues their significance. They are indeed bumps, typically made of concrete/asphalt, and they’re commonly VERY large. If you hit a tope at normal speed, you will get rocked. And likely your car will feel the pain as well. Even at less than 10 miles per hour, it’s a major hit to you and your car. Hit a tope at 25 mph, and you’ll lily have car damage. Oh, and did I mention that they’re not well marked? Sometimes not marked at all. Typically, there’s a tire repair place just after a major tope. I have a hunch that the tire repair guys actually build these killer topes so that they can keep making money. 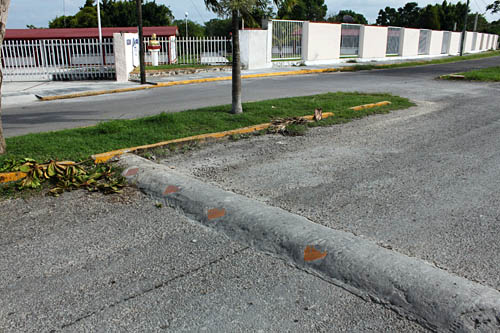 Here’s a few tips for keeping an eye out for topes:

It was also apparently Mexican law enforcement checkpoint day. In the previous 4 days, we had 1 checkpoint, where they checked our passports and we were on our way. Today, I think we had 8 or 9 checkpoints.
Most we drove right through – our strategy was not to make eye contact with anyone. At two of the checkpoints, they had us pull over and open the trailer.

The first one, they were immediately drawn to the kettlebells we had in the back. In my broken Spanish, and their broken English, we established that they were for getting strong. I pointed to the Jeep where Elizabeth was, said “mi esposa”, and did a double-bicep flex pose. They laughed (hopefully not at my biceps), had a cursory glance at the rest of the trailer, and we were on our way. 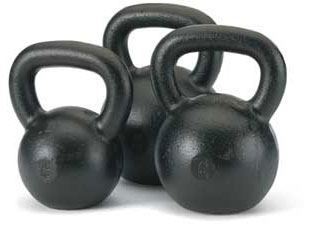 At the next one, it started off the same. They were also interested in the kettlebells, so I pulled one out. I did a couple of shoulder presses with it, and the put it in front of one of them, and pointed at him. He picked it up, tried to do a half ass bicep curl with it, struggled, and then did half a press. I was laughing, the other federales were laughing. One of the other ones, the smaller one, grabbed the lighter kettlebell from the trailer. He also struggled through a half-ass bicep curl, and then a half-way shoulder press. At this point, all 3 cops were laughing, as was I. They motioned for me to close up the trailer, and be on my way. Good times!

As we were leaving Merida, we hit another checkpoint. They told me to pull over, and as he came to the Jeep, I was ready to get him engaged with kettlebells, get him laughing, and proceed on through. No dice. These were local Merida cops, not federales. He checked our passports, asked a few questions, and then said that because Elizabeth had Sadie (our Boston Terrier) on her lap in the front seat, he was going to have to write us an infraction. Sheesh. He explained that it was all for safety reasons. Yea, right! We just passed a woman on a scooter on the highway holding a baby in her arms. Safety, my ass! Our first shakedown of the trip. Then it was time to determine a price. He said, “not much, just twenty hundred pesos”. I asked “Two Hundred Pesos?”. Yep, that was the number. Fine, take your $10 US mordida so we can be on our way. We gave him the 200 pesos, and we were once again on our way.

I think Merida is the Spanish word for “hot as hell”

So we drove away from Merida, which, by the way, is the center of heat in the Yucatan. It kept getting hotter and hotter as we approached Merida, peaked at 108 degrees F, and then started dropping again as we drove away. A few years ago we were in Merida in November, and it was so freakin’ hot!. Like Africa hot! I can’t imagine being in the city during summer. We have some friends going to Merida next week. Hi John and Cayce – hopefully y’all don’t melt in Merida!

I’m sure there’s a gas station on the way…

As we drove away from the heat and shakedown of Merida, we were on our way towards Cancun. On most days, I was filling up the gas tank in the Jeep when it reached 1/3 to 1/4 of a tank. We had over half a tank as we left Merida, as we knew there was gas along the way. Well, apparently there is only one gas station between Merida and Cancun. Midway through, my low gas warning light came on, and I was starting to freak out. I had Elizabeth google for closest gas station, and it was in Piste, at the turn off for Chichen Itza. That was like 30 minutes away. We weren’t going to make it. We were going to run out of gas. Shit! Then we saw a sign for gas, and it was like 40 minutes away. Double shit! I started to panic. 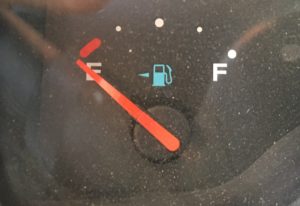 I ran out of gas once in my first car, when I was 18 years old. Never since. OK, keep speed as constant as possible. Turn off the air conditioning. Eff! We’re not gonna make it. Elizabeth had Google maps going. Then we lose cell coverage. Triple shit! Finally saw the sigh for the turn off to Piste. Gas gauge is reading lower than I’ve ever seen it in 14 years. Coast to the toll booth. Ask the guy for the next closest gas – yep – Piste he said. So we hear off towards to Piste.

Elizabeth has Google maps going. It’s on the *other* side of Piste. So we drive through the town, rolling across topes as easy as we can. We’re both sweating – both because we’re gonna run out of gas ,and because the AC has been off for the last half hour, and it’s 103 degrees. There it is – the Pemex station, so we roll into the station, and breath a slight sigh of relief.

But, there’s a line. There’s NEVER a line. 3 deep. So we wait, the Jeep idling. Worst case scenario, I can disconnect the trailer and push the Jeep to the pump. But, one again, the Jeep proved she’s a trooper, and 10 minutes later we drove the last few feet to the pump. HUGE sigh of relief from both of us.

The Pemex guy fills the tank, which takes *forever*, and it tops out at 73.6 liters. 19.4 gallons. Holy shit! Normally when I fill the tank, and I’m close to empty, it’s about 16 gallons. If I fill it to 17 gallons, I’ve always thought I’m on fumes. I’ve never put 18 gallons in the tank. Never mind over 19! Schew! Crisis averted. OK, now for the final stretch to Puerto Morelos. 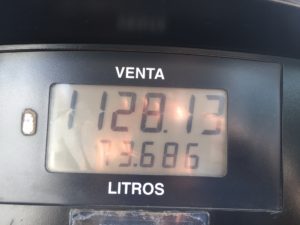 Finally, after 5 days of travel, and over 12 hours today, we rolled into Puerto Morelos. Our rental house was all ready for us. We unloaded just the basics, and headed out for some well deserved wine and dinner. We’re home. Time to decompress…

Next up – living in Mexico! The adventure continues! Stay tuned…