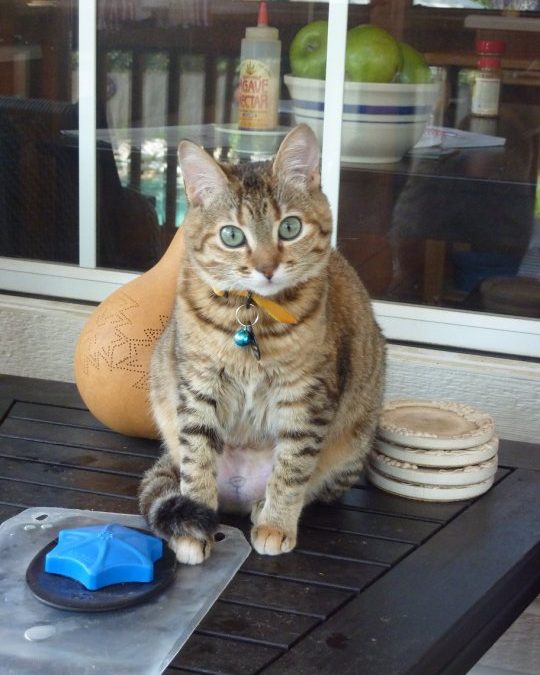 Jack was an amazing cat. He was sweet, affectionate, and probably more like a dog than a cat; he came when we called him, and would take walks with us when we walked our dog.

He was smart: He figured out how to open our screen door so that he could get out. Just by pressing the screen lightly with his paw, it would release the magnetic handle, and he could walk out the door.

We lamented that if we could have only taught him how to close it again so that the bugs wouldn’t get in the house, he would be perfect.

He was the best cat ever.

Then, one night he never came home.

I spent weeks going to the shelter, looking for him. He wasn’t chipped – and that experience alone made me swear that I would never not chip my pets again.

Every 3 days, I’d drive to the shelter, looking through the cages of the cats that had been brought in, hoping to see him.

It broke my heart.

Not only because I missed Jack, but seeing all of these other kitties & pups, who were so sweet, who needed homes – who were just craving attention and companionship – I just wanted to bring them all home, and love on them.

It was at that point that I also decided that I could never buy another pet from a breeder again.

One day, after returning from the shelter, Gary said, “I’m surprised that you haven’t gotten another cat already.”

And that was the permission I needed!

And who has the time and patience for a kitten? Yes, they’re cute, but they’re nuts & they attack EVERYTHING!

I went to the shelter looking for an adult male. 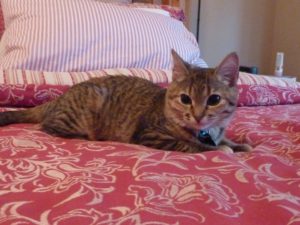 I came home with Wookie.

Wookie is the cutest cat. She’s freakin’ adorable! But truthfully, that’s where her positive attributes end. I went to the shelter looking for an adult male cat; I came home with a female kitten.

Wookie isn’t very nice. She doesn’t like to be held. She’s not affectionate, and she will not hesitate to cut you if you pet her for one second longer than she wants!

She tolerates us because we are how she eats.

Some might read this, and wonder, why I didn’t just return her to the shelter? I don’t know. I guess when I make a commitment to care for an animal, I don’t think that returning her just because she doesn’t act like our former cat was, is a good enough answer. And, I think it’s pretty irresponsible.

We were actually glad to have Wookie around, because just a few weeks after we brought her home, we lost our dog Lucy. It would have been devastating to have lost both of our pets in the span of 3 weeks if Wookie wasn’t around to distract us.

A few years later, when we got Bessie, Wookie was cool with her; of course, Bessie didn’t make that big of a deal about her. But when we got Sadie? Holy Shitballs! Wookie was PISSED at us for months! Even YEARS!

Sadie was only 9 months old when we got her, and had a TON of energy.

Or at least she did. I think that now, it’s just a game for her. She knows that Sadie isn’t going to hurt her. If Sadie wanted to, she’d had plenty of opportunities. Sadie just likes chasing Wookie. And I can tell that there are days when Wookie invites Sadie to do it.

Regardless, most of the time, if Wookie is in a room and Sadie walks in, she’ll start to growl; and will even occasionally hiss.

So when it came time for us to move to Mexico, naturally one of the questions was, what do we do with the cat?

I just couldn’t give her away. Again, she’s not a really nice cat. Everyone I know already has an animal if they want one – or more if they want more. I couldn’t return her to the shelter. People at shelters are amazing, and they do everything that they can to help animals, but those places are terrible. And finding her a home where she would get along with the other animals in the house could be tricky.

So, we’re bringing her with us.

What options did we have?

Yes, we could drive her, but that didn’t seem like a good idea.

It would be easier if we could find someone to take her for a few months – just until the visa paperwork is done and we could fly again.

But who? And she still would be really unhappy for about 3 months.

So, we were back to driving with her.

Then, we put the cat carrier in the car.

Then, I was talking to a friend of mine – she was going down to Akumal the weekend that we were leaving. IF ONLY we could send Wookie with her, and have someone in Puerto Morelos pick her up for us, and keep her for a week! YES!

We don’t know anyone in Puerto well enough to ask that of them. :/

Hmmm. But it got us thinking: How much would we be willing to pay to NOT have to drive Wookie down to Mexico?

Would I pay about $100 per day of the drive to not have her constant meowing?

$600 is about the amount of money that it would cost for a plane trip from Austin to Cancun, and 2 nights in Cancun.

Now – could we find someone to take her for a week, and fly her down?

So, Wookie is going to be flown down to Cancun, and is set to arrive about 2 days after we get there.

When we met our new ‘landlord’ in Mexico, as we were finalizing everything about the house & the pets, she said, ‘Oh, there’s something that you should know. I, ummm. . . have a crocodile.’

Yes. Since her house butts up agains the mangroves, there are crocodiles that live in that area.

She said, ‘but it only comes out during the rainy season.’

All I have to say is that Wookie had better not get eaten by a crocodile after we’ve had an escort fly her down to Cancun.