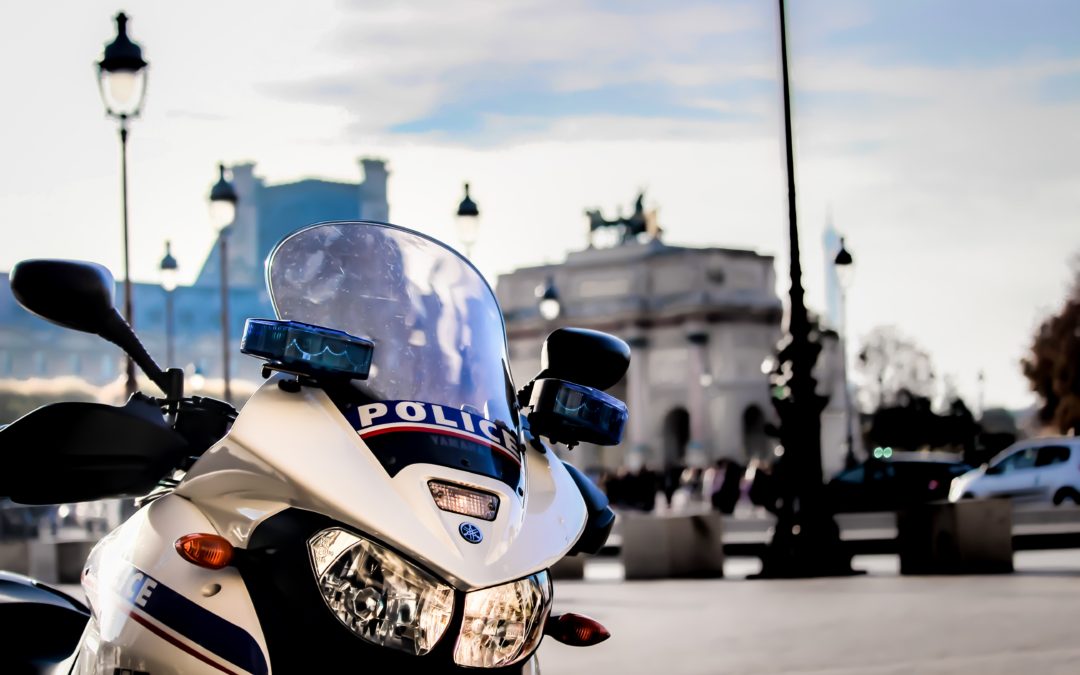 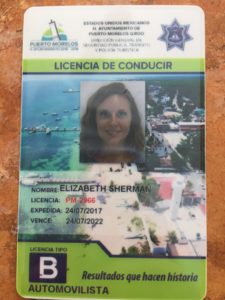 Yeah – So, remember when Gary wrote that great post about us getting our Mexican driver’s licenses? Yep. That was awesome. I had mine for about a week!

And then it was snatched away from me one Saturday morning as I was driving to Cancun (at the end of the month) when I got stopped by a motorcycle cop.

Was I speeding? Yep. I probably was.

Did I know I was speeding? nope. Because the speed limit signs vary from 100km/h to 40 km/h on the stretch of road from Puerto Morelos to Cancun.

So, here’s the short story of what happened with the cop. I tried to communicate with him, but my Spanish SUCKS & his English was just as bad. I tried to bribe him to let me off – I don’t think he understood me. If he asked me for a bribe, I didn’t understand him. He told me that I had to pay him $2000 (pesos). Basically my response back to him was, “You’re effin high if you think I’m giving you 2000 pesos. Give me the ticket.”

I’ve learned a lot about this process since ‘the incident’. I’ve added notes below to act as guidance for you going forward.

So, he asked for my license and title to the car. We have copies of our passports, Texas drivers licenses, marriage certificate and title in the glove box. I think I was thinking that he wouldn’t give me a ticket if he saw that I lived here. So, I gave him my nice, new, pretty Puerto Morelos license.

He gave me the ticket (aka: infraction), and took my license. I’d have to go to Cancun to get it back. 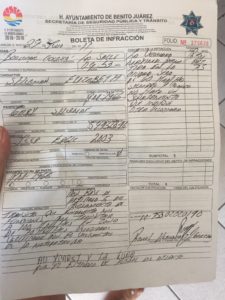 I asked him how much I’d have to pay, he said $1000. I asked him where I needed to go (because it didn’t seem obvious from the infraction) and he wrote out directions that you can see from the bottom: Av Xcaret y La Luna por El Estadeo de Futbol del Atlante – So at the corners of Xcaret & Luna, across from the soccer field.

Great! I think I know where I need to go.

Oh Jeezus Hell! The stupidity on this one is incredible!

I googled the location based on the soccer field, and was pretty confident where I needed to go. It’s just down the street from Costco and Kiddie Corner from Home Depot. 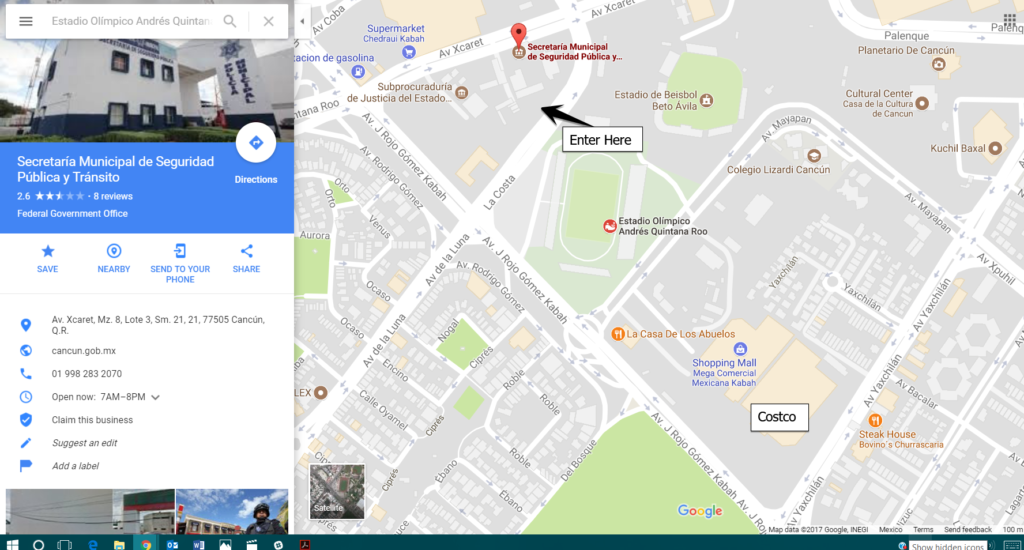 Okay – so this is where it gets good.

At this tiny little entrance, there’s a line of folks, and there are guys collecting IDs and handing out lanyards.

This is what the entrance looks like from the street view.

As I walked in, they asked me for my ID. I said that I was coming to get it. They told me that I couldn’t come in without an ID. A man behind me spoke up, and helped translate. After this gentleman said, ‘you have her ID.’ I could hear the guard saying, “*I* don’t have her ID.” No, you sir, you’re correct. You do not personally have my id.

Anyway, the line was backing up, and someone suggested that I give them anything. The first thing that I pulled out of my wallet was a copy of our permanent resident visas.

I got the lanyard, and off I went (FWIW, I never used the lanyard, and no one asked for it until I left – even then, I’m unsure that they asked for it. I just handed it over). There is a painted walk way with arrows on the ground to indicate where you need to go – other than that, it’s not obvious.

Once I was in the building, I queued up in front of what appeared to be an information desk. But I was quickly approached by another civilian man telling me that I needed to go to window #1. You have an infraction? You need to be here.

As I was handing my papers over to the officer behind the glass, the aforementioned man said, “He’s the judge.”

‘The Judge’ wrote down $1000 on my infraction, highlighted it, then told me to pay the fee, and get a copy. I was unclear on what I needed to have copied, or where. He was nice enough to get another guy who spoke some english to help me out.

This other officer explained that after I paid, I needed to get a copy of my ID.

WHAT!?! Did I hear that correctly?

But you HAVE my ID.

You have TWO of them!

And WHY do you need a copy of my ID?

At that point the first man who helped me out at the guard-station reappeared. I think he was just as flabbergasted as I was. He suggested that I go back to the guard station to get my other ID. I asked, “They’ll give it to me?” He said yes.

I really just wanted to get out of there. I still had my Texas drivers license, so I went to the copy tower across the parking lot to get a copy of my ID.

Well, that’s what it is. It’s a little tower in the corner of the lot. There’s a window, and inside the tower there’s a woman and a copy machine. It costs 1 peso per copy. Man #2 showed up in line after me. We chatted a bit, and I was saying how ridiculous this process is. His response? “Welcome to Mexico!”

After that, it was pretty easy. I paid the fine at the cashiers, and he instructed me to go to window 2.

The lady at window 2 was very pleasant, asked me to sign for my id, gave me a receipt, and I left.

All in all, I was there about 30 minutes. 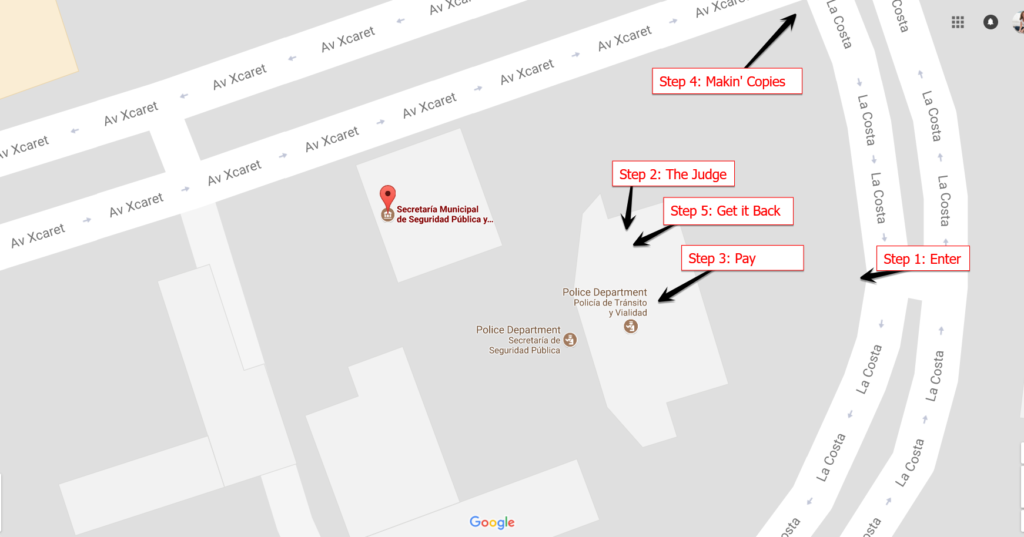 Upon leaving, I gave my lanyard back to the guards. They took it, then had me look through all of the IDs that they had collected to find mine.

In true Mexican process, there’s a lot of ‘go here’, go there, go back to window 1, baloney, but honestly, everyone there was really nice and helpful (with the exception of the guard who was insistent that he did not personally have my ID.)

But all in all, $1000 isn’t that much money for the current exchange, it’s about $60 USD. In the states, a speeding ticket will cost you $200 USD minimum – between the fines, and defensive driving. And although I’ve complained in this post about needing my ID (I think the irony is very funny), it really was very easy to pay the ticket.

What you need to bring/know:

What you need to know if you get pulled over (this is all heresay):